The myth of peace 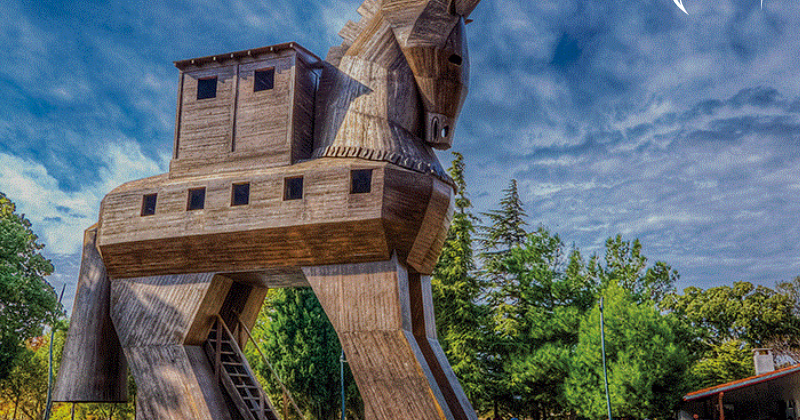 The city of Troy, which is located in the region of Çanakkale in present-day Turkey ,cannot be separated from Homer’s account of it in the Iliad. The Iliad is a poem that begins with the siege of Troy, when the Greeks besieged for 10 years. The reason for the siege is very simply, the queen of the city of Sparta Hélène fled with Paris the prince of Troy. The poem is divided into several series of events: the dispute between Achilles and Agammemnon, the death of Patroclus, the fight between Achilles and Hector… The poem ends with the famous episode of the Trojan horse: a ruse of Ulysse that will lead to the destruction of the city.

If everyone has already heard of this myth which is a masterpiece of literature, I propose you to discover now a diversion of this poem. I would like to tell you about the play by Jean Giraudoux. Giraudoux is a French writer who wrote La guerre de Troie n’aura pas lieu (The Trojan war will not take place). The text was released in 1935. In this play, the context remains the same: Paris and Helen have fled to Troy and the Greeks are about to come and take back the queen of Sparta. However, the poem places the plot after 10 years of siege and therefore after the declaration of war, in the play everything starts before the declaration of war.

Everything is done by Hector, Paris’ brother, and by the Trojan women to avoid war. The comedy-drama illustrates Hector’s unwavering determination to avoid conflict with the Greek cities. He is prepared to give up his pride, to be considered a coward by some on his side, and even to be humiliated so that peace can be preserved. By adopting this attitude, Hector is advocating peace. This may seem paradoxical for the warrior that he is, yet he is against this war because he knows it too well, he knows the cruelty that reigns on the battlefield, like Giraudoux who lived through the First World War. Unfortunately, Hector is not preaching to the choir since many people want war in Troy, mainly the elderly and the men who will not live through it. A conflict between pacifists and belligerents will be waged in Troy to the end. This advocacy for peace that Giraudoux wrote, thanks to the plot of the Trojan war, is magnificent, so I let you go and see this other version of the myth and discover the end.